Through dozens of historic photographs  Silvermine tells the story of the bucolic hamlet Carl Schmitt called home for over 70 years.  See a preview and order here from Amazon.com. Your purchase benefits the Carl Schmitt Foundation.

In an interview with the HAN Network, CSF Director Samuel Schmitt talks about his book Silvermine and how important the place was for his grandfather Carl Schmitt.  “Even after traveling and living all over Europe, Silvermine was his home.  He meant this on a deep level, a place where, as he put it, ‘body and soul become one.’”

Carl Schmitt stands proudly outside his new studio on Borglum Road in this photograph from 1919. Local contractor Bill Lyons completed the building at cost for his artist friend. It featured Flemish bond brickwork and a red tile roof outside, and handmade tiles on the floor inside. The single room and loft were heated by a potbelly stove which proved barely adequate when the artist worked late on chilly winter nights. Schmitt sold the building when he moved his family to Europe in the late 1930s. In 2004, after being used as a house and falling into disrepair, the studio was purchased by the Carl Schmitt Foundation, which restored it to its original condition. It now serves as one of the Foundation’s galleries.

Silvermine, home to Carl Schmitt for over 70 years, is known today for its natural beauty, the Silvermine Guild Arts Center, and the Silvermine Tavern.  Few, however, are aware of its rich history.  Encompassing sections of New Canaan, Norwalk, and Wilton, Connecticut, Silvermine went from a small mill town during the 18th and 19th centuries to a vibrant artist colony in the early 20th century.  Numerous artists, including Carl Schmitt, attracted by the scenery and proximity to the art scene in New York, flocked to the area, using the old mills and barns for their studios.

Silvermine recounts how the picturesque valley, once buzzing with sawmills, was transformed into a cultural hub with the coming of the artists, including Carl Schmitt, who formed the Silvermine Guild in 1922.  It’s part of the well-known “Images of America” series from Arcadia Publishing.  See a preview and order here from Amazon.com.  Your purchase benefits the Carl Schmitt Foundation. 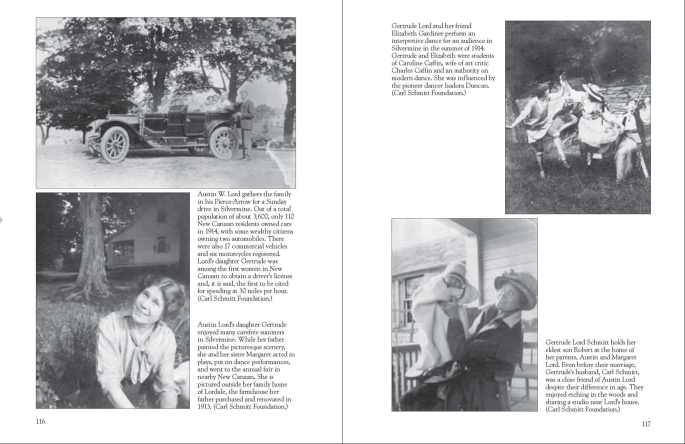 “People who learn about the Guild, about my grandfather’s work, his century of life painting the land and his beloved family in Silvermine – they always want to know more.,” said Schmitt.  “I hope this book answers some of their questions and inspires them to learn about this wonderful place.”  Order now for Christmas!