Gertrude Lord (left) and Elizabeth Gardiner dancing, a photograph taken on the night of the Beaux-Arts ball.

The New York Times called it “by far the most brilliant and artistic event of the Winter social season,” the New York Press, “the most elaborate spectacle of its kind New York has ever seen.”  It was the first annual Ball of the Fine Arts, given by the Society of Beaux-Arts Architects and held at the glittering ballroom of the Hotel Astor in Times Square.

The ballroom at the Hotel Astor, around the time of the Beaux-Arts ball.

The guests at the costume ball  included, in the words of one report, “some the most beautiful women and the undisputed social leaders of the city”: Mesdames Stuyvesant Fish, Peter Cooper Hewitt, Oliver Harriman, and Otto H. Kahn. Mrs. Cornelius Vanderbilt came to the ball only after being seen at the Metropolitan Opera where, according to the Herald, “that tragic tale of ‘Manon Lescaut’ in the musical setting of Mr. Puccini” was being performed with “Mr. Caruso in the title role.”

Scenes from the ball captured in the New York Times, March 1, 1914.

The evening’s entertainment, “Venice Through the Ages,” was a three-part extravaganza illustrating the progression of Venetian civilization from the backwardness of the “Dark Ages” to the glory of the Renaissance.  Gertrude Lord, then 23, took part in the most elaborate portion of evening, the Dance of the Months, with her friend Elizabeth Gardiner.

An early suitor of Gertrude’s recalled his first meeting with her at a soiree in Silvermine in 1915: “A slender, athletic girl… with shy brown almond-shaped eyes in whose depths lay an affectionate smile.  As she turned to some other guests, he noticed her soft, chestnut hair, her straight, warm mouth and the gentle way she carried herself.”  Sitting next to her older sister Marguerite, he had watched her dancing the evening before, where “she wore the usual white chiffons, danced with the usual grace and was applauded with the customary courtesy.”

Gertrude and her friends dancing in Silvermine.

Gertrude was instructed in dance during her summers in Silvermine  by Caroline Caffin, wife of New York art critic Charles Caffin. Caffin, a protege of modern dance pioneer Isadora Duncan, specialized in “interpretive dance” which sought to portray stories or music through the graceful movements of the dance.

Gertrude earned a place in the dance roster at the ball as her father, Austin W. Lord, was a charter member and past president of the Society.  The professional group had its origins in the busy social scene surrounding the famed Ecole des Beaux-Arts in Paris, where Lord had been a student twenty-five years earlier.

Though Gertrude’s days of glittering ballrooms, elaborate tableaux, and dances on the lawn ended upon marriage to Carl Schmitt, her calm grace continued to capture the artist’s eye for the next 65 years. 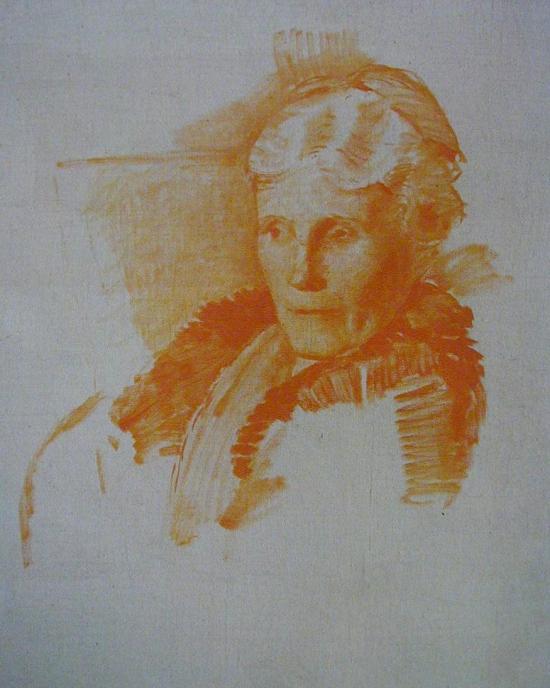 4 thoughts on “On This Day: February 20, 1914—”A slender, athletic girl with shy brown almond-shaped eyes””