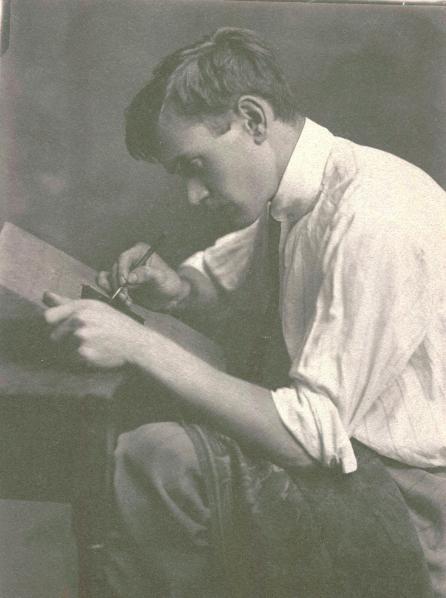 Schmitt during his student days, a photograph taken by his friend James W. Porter.  Porter, a professional portrait photographer, was one of the most dedicated supporters of Schmitt’s early career as an artist.

The first part of this article saw Carl Schmitt’s transition from high school dropout to most favored student at the National Academy of Design, studying under the illustrious Emil Carlsen and winning the top prize in still life.  His successes there pointed to a career of great promise, and a comfortable life as a painter for the great men of business and industry in the early 1900’s.

Schmitt began his professional career even before he graduated from art school.  His earliest recorded commission comes from 1906, when he was paid the handsome sum of $50 for a portrait of one Salvini Guarnieri, a businessman from Schmitt’s hometown of Warren, Ohio.  A friend of Schmitt’s reported from Warren that “the portrait gave unqualified pleasure.”  Other commissions and sales followed from well-to-do residents of Warren and nearly Youngstown.  In 1909, Ohio state senator Benjamin Wirt of Youngstown paid $10 for a still life painting of an “egg, onion, cloth, and ginger jar.” 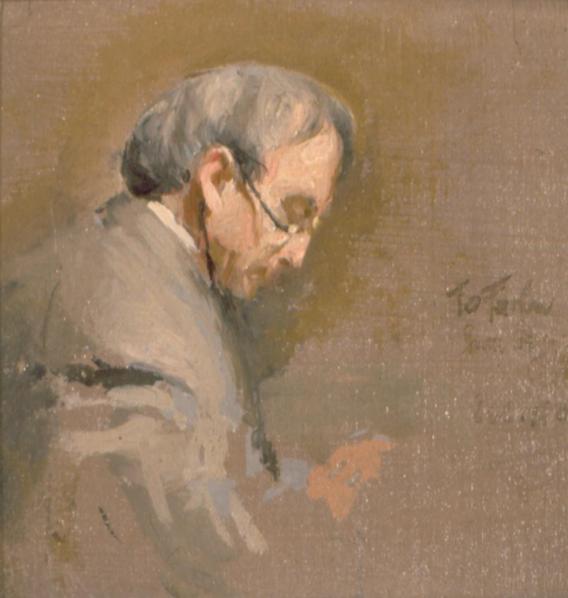 That same year Schmitt painted a portrait of his long-time friend and benefactor, James W. Porter.  Known to his friends as “Jimmy,” Porter was a professional portrait photographer, connoisseur of American art, and a leading art dealer in the Youngstown area.  He worked closely with Joseph G. Butler, Jr., a leading industrialist and one of the richest men in the region, in the development of Butler’s art collection.   In 1917 Butler made this collection, along with a gallery and a generous endowment, the nucleus of the first museum devoted to the art of the United States, the Butler Institute of American Art.   Ironically, it was success of portrait photographers like Porter which hastened the decline of portraits in oil such as those being done by Schmitt.

Porter, along with Zell Hart Deming, publisher of the Warren Tribune and an early patron of Schmitt, would prove the most fervent supporters of the young artist in the early years of his career.  As his correspondence with Schmitt and the artist’s own records reveal, Porter was tireless in his promotion of Schmitt’s works through exhibitions and sales at his gallery, as well as commissions from some of the area’s wealthiest and most prominent citizens.

Schmitt’s account books record the sales of over seventy works to residents of northeast Ohio, secured mostly through Porter’s efforts.  These sales would prove to be Schmitt’s most reliable source—and often his only source—of income through the 1920s. 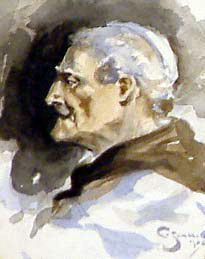 Profile of a Monk, watercolor, 1906, 7 x 5 in.
Butler Institute of American Art, Youngstown, Ohio; Gift of the Estate of Lorena Coale, 1986.
This work may have been among the watercolors lent by Mrs. William Coale for the Schmitt exhibition at the Warren public library in 1912.

Guarnieri’s portrait was among the thirty works shown at Schmitt’s first one-man show, held at Warren’s public library over Memorial Day weekend in 1912.  Organized by Deming and Porter, the show featured paintings, pastels and watercolors lent by prominent people in Warren and Youngstown, most of whom were Deming’s personal friends.  Her Tribune featured a glowing review (most likely written by Porter) praising Schmitt’s pastels as “wonderfully soft and beautiful in coloring.”  Deming wrote excitedly to Schmitt that the brief exhibition had attracted over 1500 people.  The success of the show testified both to the talent of the young painter and the marketing skills of his promoters.

Dawn Sketch Mills No. 2, oil on prepared artist’s board, 1909, 7 x 9 in.
A similar work entitled Opus I was shown at the 1912 exhibit.  According to an unsigned review (probably penned by Jimmy Porter): “One of the most striking pictures in the exhibit is a large canvas of a rolling mill at Youngstown by night. This picture breathes the mystery of smoke and flame and industry and is typical of the iron industry of Youngstown.”  It was offered for sale for $350.

By 1918 Schmitt was receiving $600 for a commissioned portrait, generous at a time when the average annual income in the United States was around $1500.  As lucrative as these jobs could be, it was clear that by this time Schmitt was growing weary of pleasing fastidious sitters, as well as the travel these commissions involved.

Schmitt’s commission for the portrait of Mr. H. K. Wick, completed in 1917, may have been a turning point for the young portrait painter.  Mrs. Wick asked Schmitt to paint her husband’s portrait shortly after his death in 1916.  While she was pleased with Schmitt’s first painting (shown below), Schmitt’s copy of the work, requested by Mrs. Wick for the office of the Republic Rubber Company (where Mr. Wick was a director), proved a trial for both artist and patron.  In a series of letters over many months, Mrs. Wick gave detailed instructions as to the color scheme and other details.  A letter from May, 1917 reads in part:

“Please paint the necktie a dark subdued blue, without much highlight. Also hope that the background is dark, almost black, shaded to a grey blue and without any effect of tapestry.  I like a vague suggestion of blue and sky if this treatment is permissible . . . the eyes are to be a decided blue, which I think you already know.”

Mrs. Wick’s most serious complaint came in a letter after the portrait was finished.  “I can not agree with you in regard to it being a likeness.”  As a friend wrote to Schmitt, “Evidently Mrs. Wick is no longer sure of herself as to how her husband looked and, worse still, (for you) seems unable to settle how she wants him to look.”  In the end, an exasperated Schmitt politely refused to acquiesce to all of his patron’s demands, Wick refused to accept the finished painting, and the artist returned half of the agreed $200 fee to the wealthy widow.  In the midst of all this, it is no surprise that Schmitt declined Mrs. Wick’s request to paint her own portrait.

Although he could have had a secure career as a portrait painter, Schmitt gradually distanced himself from commissioned work, concentrating instead on gaining recognition through national and international exhibitions.  It would prove a hard road.

Schmitt’s decision was not simply a matter of preference or convenience on his part.  “Art is no better than the patron,” he would reflect many years later.  Many artists, even supremely successful ones such as John Singer Sargent, have expressed a fundamental dissatisfaction with creative work done for the money.

At a deeper level, however, Schmitt came to the realization that the pursuit of painting as a fine art demanded a freedom that was hindered by anything extrinsic to the purpose of art itself, particularly commercial considerations.  “There is art and there is commerce,” his friend Hilaire Belloc was fond of saying.  Practically all of Schmitt’s subsequent portraits are of members of his family and those he knew personally.  As he himself expressed in more positive terms: “All creation in the Fine Arts is done in privacy and in love.”

4 thoughts on ““Please paint the necktie a dark subdued blue”: Schmitt’s early career as a portraitist”