Carl Schmitt wrote this brief essay in one of his notebooks in 1935.  It recounts a sketching trip where he was overtaken by the ruins of the massive palace of the emperor Septimius Severus, built around AD 200 on the Palatine Hill overlooking the Circus Maximus in Rome.  Some of the pastel sketches he made on this trip were shown at an exhibition in New York in the summer of 1935.  Later Schmitt used them as the bases for a number of watercolors and oil paintings.

My companion took me along a foot path over the Palatine to the farthest western end and showed me a heroic ruin on the hillside.  I immediately liked it.  Green fields surrounded us richly sprinkled with scarlet poppies.  On the ground among the flowers I saw occasionally bits of mosaic and iridescent glass.  The building was bulky and recalled the typical poetry deep in Rembrandt.  He must have seen somewhere a print of this.  On this account it was good to draw but also because it was isolated.  An occasional pair of lovers or two mounted policemen came by and seminarians.  So in the heart of Rome and overlooking it, we sat down to sketch. 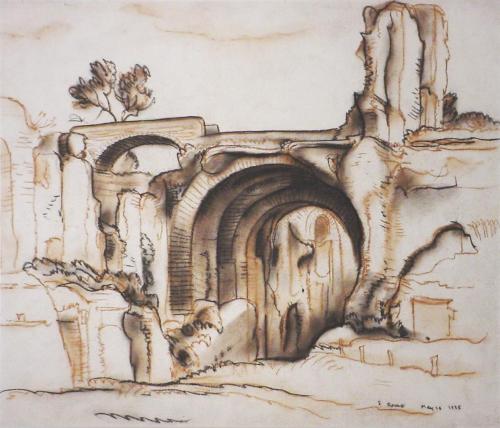 Rome lives in the round.  All sides of the ruin, on different levels, are interesting.  And it is constructed, not poured.  Even the vertical blind walls are arched with the peculiar thin Roman tile.  That solid construction coupled with tremendous scale characterizes ancient Rome.

When I had finished a beggar came by, a little shrunken man, toothless, and in dialect he said something, so I gave him two soldi, and thinking of my investment I asked him who made the building we were drawing.  He said Septimius Severus had built it for his palace, and shuffled along. 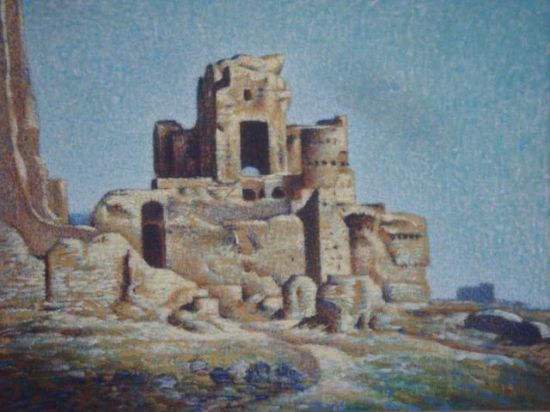 Palace of Septimius Severus, oil on canvas, c. 1950, 20 x 24 in.
Schmitt painted this work for his close friend and benefactor Harold M. Landon, a stockbroker and art collector.  Landon’s most prized painting, Luca Giordano’s The Flight Into Egypt, now hangs in the Metropolitan Museum of Art.

My companion who knows about such things told me that Septimius Severus was an Emperor-soldier who lived in the 2nd century and that he found the world in fragments and left it one, even imposing peace in Britain.

Whether what I had heard was true or not, there stood that bulk.  I have never felt time so challenged.